For the first week of September,  my husband and I set off for Percé, Québec, which is located on the tip of the Gaspé peninsula, a region known as Gaspésie.

Once we passed historic Quebec City, we stopped in Kamouraska for coffee at the charming Café au Clocher, which is just across from the church. 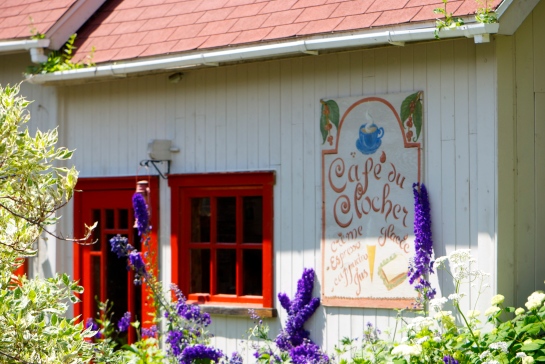 Kamouraska is reputed to be the prettiest town in Québec.

In 1970, the late Canadian writer Anne Hébert published her novel Kamouraska, which is set in the 19th century. It was originally published in French. In 1973 the novel was made into a film directed by the celebrated Quebec filmmaker Claude Jutra and starring Geneviève Bujold and Richard Jordan. Jutra and Hébert collaborated on the screenplay.

Here is the summary from Wikipedia,

It tells the story of a woman, Elisabeth D’Aulnières, who conspires with her lover, an American doctor, to kill her husband, the seigneur of Kamouraska. The narrative begins with Elisabeth beside the deathbed of her second husband, Jérôme Rolland, a notary. The story is told in a series of flashbacks. The narrative begins in the third person, but later switches to the viewpoint of Elisabeth telling her story in the first person….

The story is based on events surrounding the 1838 murder of Achille Taché, seigneur of Kamouraska, by George Holmes, an American doctor in love with Taché’s wife, Josephte-Joséphine-Eléonore d’Estimauville.

I checked to see if other Canadians had written about the region and discovered that Philippe-Joseph Aubert de Gaspé, who was born in Quebec City in 1786, is credited with having written the first French-Canadian novel, Les Anciens canadiens. The following is taken from the online Encyclopedia of French Cultural Heritage in North America.

In 1863 Philippe Aubert de Gaspé published Les Anciens Canadiens, a novel of manners situated around the time of the Conquest in 1759. His work conveyed to future generations the memory of a way of life already in its dying days. Aubert de Gaspé’s novel was a smashing success, not only during his own lifetime, but also well beyond. Critics have consistently praised the book, considered a Quebec literary classic. Some of the many epithets bestowed on the author include “first historian of popular traditions,” “first memorialist of the British regime” and “chronicler of the elite and historian of popular traditions.”

I also learned that de Gaspé’s manor house in Saint-Jean-Port-Joli has been restored and is now open to the public as the Muséee de la mémoire vivante, although we didn’t go there.

From Kamouraska, we continued along the coast, following route 132, and stopped just east of Rimouski for the night. We had our first fish dinner at a nearby restaurant. I had tried to find a wonderful place we had eaten in several times before. It may actually have been the same restaurant, but evidently it had new owners. The Coquille St. Jacques was not the sumptuous dish I remembered and the prices had more than doubled. From a friendly and authentic fish restaurant, it had turned into an uptight and overpriced tourist trap. So much for development!

The following morning, however, we stopped at another touristy restaurant for breakfast, but it was surprisingly good. They also had an art gallery and a strange array of sculptures outside the building leading to the St. Lawrence River. At this point the opposite shore is no longer visible. 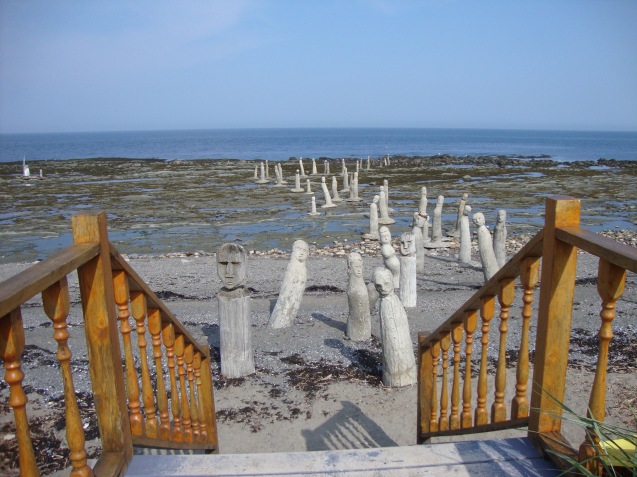 We drove on to Percé, which faces the Gulf of St. Lawrence. The town itself is named after the great limestone rock that has one remaining arch. A second arch collapsed in the 19th century, but you clearly see see the remaining section jutting out on the right.

Here is a different view over looking the town from the nearby mountain. Across is the Ile Bonaventure, which you can visit by boat. Part of the island is a bird sanctuary. 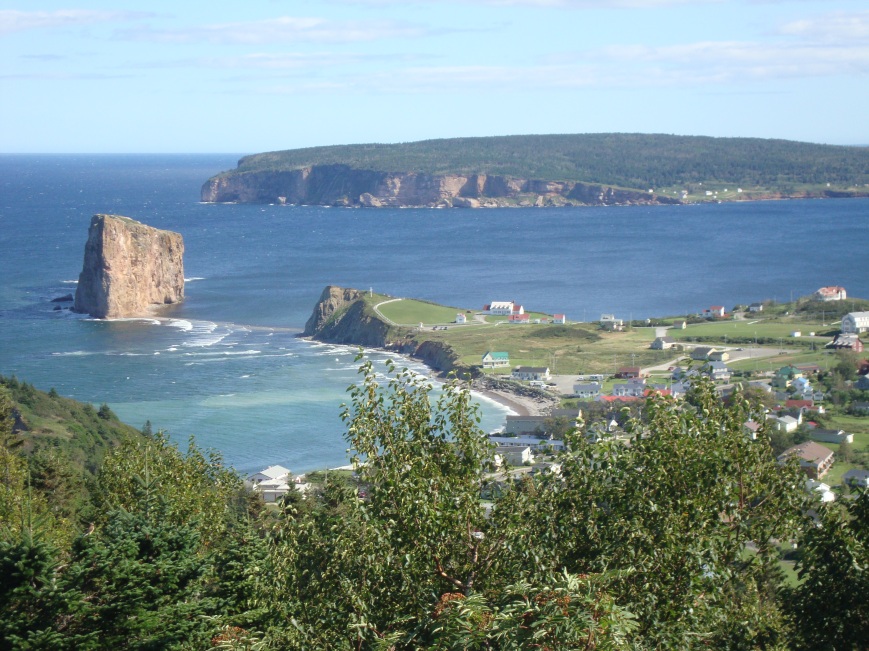 Thousands of gannets nest on the island. As you can see, they are beautiful white birds, with striking beaks that look like they have been painted on.

In Percé, we stayed at the Hotel Auberge les Trois Soeurs, owned by the brother of a friend of ours. From our veranda, we had a lovely view of the rock. The restaurant next door, La Maison Mathilde, is named after the owner’s neice, and is probably the best in town. We feasted on fresh seafood and homemade desserts to die for! 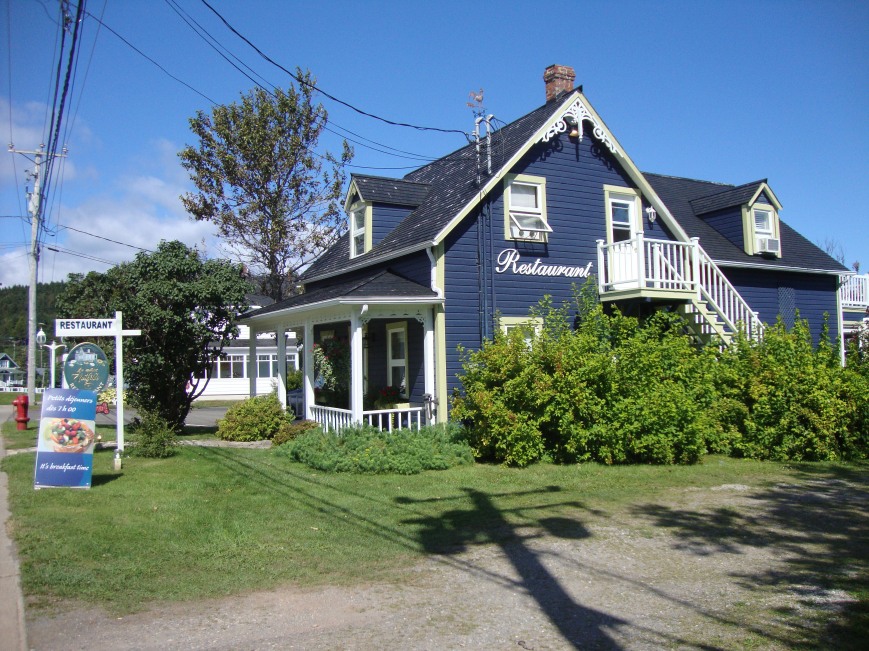 After four glorious days, we headed home, stopping at Atkins et Frères to pick up some delicious smoked salmon in maple syrup. Unbelievable! 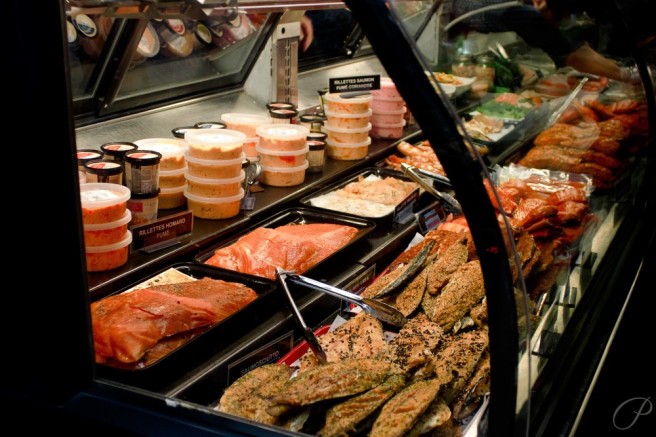 When we got home, we checked our diaries and discovered that it had been ten years since our last visit to the Gaspésie. Next summer we plan to visit Cape Breton Island, Nova Scotia, but I don’t think we’ll wait long before returning to Percé. A wonderful time was had by all!