Patrick Modiano’s Honeymoon opens in Milan. It is August and insufferably hot. Jean, the protagonist, is on his way home to Paris but between trains. Since he has four hours to kill, he stops in at the bar across from the train station. It is dark and cool and practically empty. He overhears the conversation between the barman and a customer, who are talking about a French woman who committed suicide in the hotel two days earlier. Intrigued, Jean buys a newspaper and reads the obituary once he is on the train. Later we learn that he knew the woman, Ingrid Teyrsen.

Eighteen years later, Jean returns to Milan. As a documentary filmmaker, he has spent most of his adult life making films about explorers who disappeared. Not only is he tired of making films no one cares about, but he’s tired of his life, so he decides to disappear.

Modiano’s novels often engage with this theme. In Dora Bruder, which I read soon after Modiano won the Nobel Prize for literature in 2014, he investigates the disappearance of Dora, a teenager who ran away from the convent her parents had placed her in during the Occupation in 1941, undoubtedly for her safety. In this work of creative nonfiction, Modiano strives to understand why she would have done such a thing. We soon learn that she and her father were both deported to Auschwitz in September 1942. What happened to her in the interim? Modiano writes:

It seemed to me like I would never find any trace of Dora Bruder.Therefore the yearning that I felt drove me to write a novel, Honeymoon, a way as another for keeping on concentrating my attention on Dora Bruder, and maybe, I said to myself, to elucidate or guess something about her, some place she had been, a detail of her life.

So Honeymoon was written while writing Dora Bruder, as an exercise to help him understand why Dora ran away. The exercise appears to have worked. Once Jean has staged his disappearance, he returns to Paris, to the shabby suburbs where he once lived, and begins writing the biography of Ingrid Teyrsen, who (like Dora Bruder) was sixteen when he first met her. The writing of the biography triggers a series of flashbacks and speculation about what might have happened to her during the war, all interspersed with glimpses of Jean’s life, both past and present. By the end of the novel, Jean understands only too well why Ingrid took her own life.

Although Dora’s running away was in a very real sense suicidal, the ending of Dora Bruder is somewhat different in tone. However vague, we do get a sense of her life. Modiano writes:

I shall never know how she spent her days, where she hid, in whose company she passed the winter months of her first escape, or the few weeks of spring when she escaped the second time. That is her secret. A poor and precious secret that not even the executioners, the decrees, the occupying authorities, the Depot, the barracks, the camps, History, time–everything that defiles and destroys you–have been able to take away from her. (119)

In writing about Dora’s life, Modiano gave it meaning, at the same time granting a sense of reality to all the others who disappeared and died during the Holocaust. For this, he undoubtedly deserved the Nobel Prize. 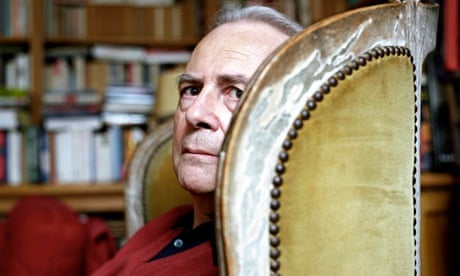 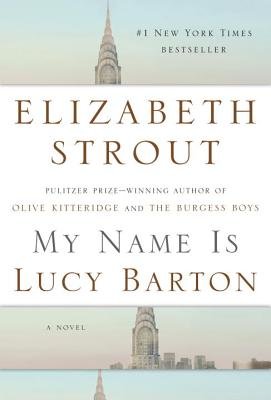 While the subtitle of this book announces itself as a novel, in terms of length, it more closely resembles a novella or short story, as it can be read in one sitting. But in terms of the depth of emotional involvement it manages to draw out, it reads more like a novel.

My Name Is Lucy Barton begins with the narrator Lucy recalling the time she spent nine weeks in a hospital room in New York City facing the Chrysler building. She had had an appendectomy but developed a fever. Although she was subjected to all kinds of tests, the doctors were unable to figure out what was wrong with her, so her husband asked Lucy’s mother to visit, which she immediately does. She has not seen her daughter in years. The story hinges on their relationship, bringing us back to Lucy’s childhood in a small town in Illinois, where her family suffered extreme poverty.

Suffered is the right verb here. Strout briefly lets us know what it was like for a child to be tormented at school by her classmates and teachers for being so poor. The family, which includes three children, actually lived in a unheated garage. The deprivations the children experience reminded me of Tilly Olsen’s short story, “I Stand Here Ironing.” Like Elena Ferrante, Strout shows how poverty can be stultifying and scaring. Lucy is not even allowed to cry. What saves her is that she is able to escape into books. Lucy says,

We also learn that Lucy’s father was essentially destroyed by the trauma of his experience in WWII. He cannot forget the atrocities her committed on German soldiers. What Strout seems to be getting at is how the humanity of both the torturer and the victim is violated, with lasting results. Following the war, many suffering from such trauma received little or no help. The situation has not improved all that much, as we continue to hear of the PTSD of those who went to Afghanistan and Iraq.

Fortunately for Lucy, she is bright and eventually wins a college scholarship. She leaves home, graduates, and marries a man who is completing his postdoctoral studies at the university. Because he is of German origin, her father wants nothing to do with him, thus creating a serious breach between Lucy and her family.

After Lucy and her husband settle in New York and have two daughters, the emotion picks up again. Lucy has two stories published and meets the writer Sarah Payne, who has been faulted by a male critic for being “compassionate.” Lucy goes to hear Payne speak on a panel at the New York Public Library and notices the man “sitting alone in the back row.” I do like Strout’s sense of humour, her ironic use of understatement. Before long, Lucy becomes a student in Payne’s writing class. It is essentially through writing and following Payne’s advice — not to protect anyone as she writes –that Lucy is able to construct a viable and whole self.

It seems too that Lucy’s mysterious illness was caused by her need to have her mother’s love affirmed. Of course, readers understand that Lucy’s mother loves her. She has after all taken a plane on her own for the very first time in her life in order to visit her sick daughter. Since Lucy’s mother has no money for a hotel, she actually sleeps in a chair in Lucy’s hospital room. But because her mother has been so hardened by poverty and what must have been a brutal marriage, not to mention her own impoverished upbringing, she cannot bring herself to tell her daughter she loves her.

It may very well be that Lucy’s mysterious ailment was a manifestation of her need for parental love. We learn that her doctor has taken an interest in her and comes to check in on her even on the weekends, when he doesn’t work. We are told that members of his family died in the camps during the war, yet this man is still able to express love and kindness — in a word, compassion. In a sense, he becomes the positive father figure Lucy lacked.

By the end of the novel, Lucy reflects on the pain she has caused her own children and adds,

I think I know so well the pain we children clutch to our chests, how it lasts our whole lifetime, with longings so large you can’t even weep. We hold it tight, we do, with each seizure of the beating heart: This is  mine, this is mine, this is mine.

What is unique, is that Strout writes, “we children.” This is no ordinary heart to heart. Strout is speaking directly from her wounded child to the reader’s. This is a beautiful and touching ending, a novel narrated with the simplicity and honesty of a child.

As much as I enjoyed my sojourn in Cuenca, Ecuador, there was one serious drawback: the altitude. Cuenca is located in the Andes, some 8,300 feet above sea level, so it is not unusual for visitors to experience altitude sickness. While I did not pass out or throw up, I did experience shortness of breath, lack of appetite and fatigue as well as some dizziness and mental confusion. Altitude sickness can also result in strange dreams and I must say, I had my share, many about feeling constricted. It’s interesting how one’s consciousness can express a body sensation in narrative terms; for example, a dream of being confined in a physical space. It’s a bit frightening, but the fear may be a prompt to move out of that space.

However, there can be a few benefits to living at a high altitude if it doesn’t affect you too adversely. For one thing, it’s a good way to lose weight. Because digestion is slowed, you feel full before finishing your meal. Consequently, you will not find many obese people at this altitude.

After a few weeks, I felt the symptoms subside. Unfortunately that didn’t last. I recently read that it can takes months, even years to adjust. Overall, I felt like I was being held down by an invisible weight, so it was a relief to fly north to Mexico — to the southern Pacific coast — and be back at sea level.

During winter months, the weather is almost perfect: sunny and hot. This year there has been some rain during the dry season, and this is blamed on El Nino.

From my terrace I could see the mesmerizing Pacific Ocean. 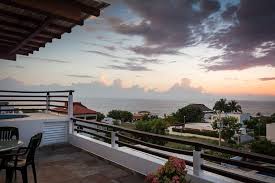 In between, there is lush tropical vegetation and beautiful flowers such as bougainvillea and hibiscus

as well as numerous cacti.  Even the birds are exceptionally pretty — a few tiny hummingbirds, yellow finches, swallows and turtledoves, not to mention the grackles. The occasional iguana can also be spotted.

Although it sounds like bliss, soon after my arrival, I came down with a dreadful chest cold that I first blamed on the AC but later came to believe was caused by an allergy as the irritation persisted. Once that cleared up, I decided to see the local dentist and have some ancient fillings replaced. One had already fractured. But the cost of dental work is less than one third what it is at home and the work is good quality. My dentist spent an hour cleaning my teeth to the tune of 50 CDN.

The food in Mexico is also excellent. There are many affordable restaurants in my neighbourhood, the cost of which hardly makes it worth cooking, but there is also a large covered outdoor market and a huge supermarket, both of which are relatively inexpensive. The fresh fruits available are a wonder to behold and delicious to consume.

So despite the inevitable intrusions of reality, I much prefer the enchantment of Mexico and plan to return next winter.

Enchantment may be a cliché, but Mexico does have its magic. This is a country of extreme contrasts and often chaotic. It might even be described as a land of dreams and illusions. The beauty of Mexico is undeniable, but so are the dangers. Thankfully there are still some safe havens.