After teaching two demanding upper level summer courses, I set off with my husband and a friend for Nash Creek, New Brunswick, where we stayed in a huge farm house of about twenty rooms built in 1930 that had been converted into a B&B but is no longer in operation. Nash Creek is a tiny community of only 400 residents, but it is a lovely place to live, situated on the Baie des Chaleurs.. Unfortunately it rained the day we spent there, but the spacious house and generous hospitality of the woman who lives there made it a very comfortable stay.

On Tuesday morning my husband and I drove off to Liscombe, Nova Scotia, on the eastern shore of the Atlantic. Naturally, we stayed at the Liscombe Lodge, where we had a lovely little cabin overlooking the Liscombe River. That evening we dined on their famed planked salmon, made from a recipe that derives from the indigenous Mi’kmaqs of the region. 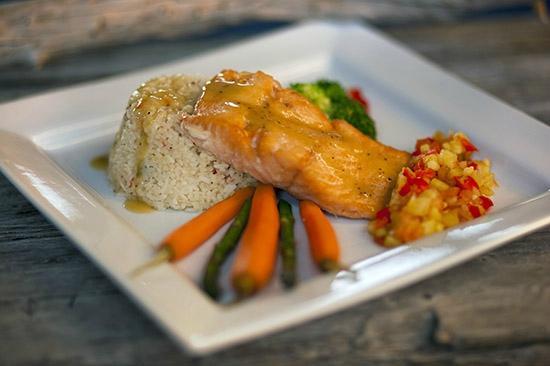 Planked salmon is made by repeatedly basting the salmon with a sauce made from butter and maple syrup. It is cooked on a cedar plank placed close to an open fire. Need I say it is delicious!

The following morning I was sorry to leave, but we had a reservation in Baddeck, Nova Scotia, from where we toured Cape Breton. After checking into our hotel, I still had time to visit the Alexander Graham Bell National Historic Site. According to Parks Canada’s description, the museum

Bell was born in Scotland, moved to London, England, and then migrated to Nova Scotia, as did many Scotts — hence the name. Along with Bell’s magnificent summer home, Beinn Bhreagh (see postcard below), there is a Gaelic College on Cape Breton.

Nova Scotia has a fascinating history. In addition to its strong Scottish heritage, there are the first nations Mi’kmaq, the Acadians and the Loyalists. According to Wikipedia, “During the first 150 years of European settlement, the colony was primarily made up of Catholic Acadians and Mi’kmaq.” The Mi’kmaq (Mi’kmaw, Micmac or L’nu, “the people” in Mi’kmaq) are Aboriginal peoples who are among the original inhabitants of the Atlantic provinces of Canada. The Acadians are the descendants of French Catholic settlers who came to North America from 1604 onward and settled in the territory known as “Acadie,” which included mainland Nova Scotia. Later, there was an influx of American colonists who came to be know as Loyalists.

Loyalists … supported the British cause during the American Revolution (1775–83). Tens of thousands migrated to British North America during and after the revolutionary war — boosting the population and heavily influencing the politics and culture of what would become Canada.

The next day we began our tour of Cape Breton Island, following the Cabot Trail, named after the explorer John Cabot, who arrived on Cape Breton in 1497. The Trail is a 297-kilometer loop around most of the island, passing through the Cape Breton Highlands National Park at its northernmost point. The park is flat-topped plateau cut by deep river valleys, a wilderness home to moose, black bears, and bald eagles.

As you can see in the enlargement, the Cabot Trail skirts the edges of the island, at times clinging to steep ocean side cliffs. The views are spectacular.

We spent another night in Baddeck and then stopped near Shediac, the lobster capital of the world, where we indulged in a seafood dinner on the wharf. The next day we set off for the magical Gaspésie.